The Race Committee for Offshores:

The Race Committee for Squibs:

1.2 The Holyhead Port Authority Bye-Laws and Harbour Regulations, and Guidelines for Leisure Users will apply.

Notices to competitors will be posted on the official notice board located in the clubhouse and on the Club Website on these links:

Any change to the sailing instructions will be posted at least one hour before the scheduled starting time of the race concerned.

Signals made ashore will be displayed on the club flagpole.

The Cruiser Racing programme for the season appears on the Club Website.

Other Race Programmes are yet to be defined

The minimum number of yachts or dinghies that will constitute a race shall be two.

Class flags will be:

This changes the meaning of Race Signal Flag M.

Racing will take place according to the category of the event as follows:

A course may be changed by the Officer Of the Day up until the warning signal for the class concerned, by changing the Course Board on the quarterdeck, and breaking out I.C. Flag ‘F’ over the class flag, drawing attention to this by a double sound signal.

9.1 Marks are as described on the Official Course Card.

With the exception of races involving Committee Boats, the starting and finishing marks will be inner (IDM) and outer (ODM) distance marks distinguished as white cylindrical buoys / poles.

For races involving Committee Boats the starting and finishing marks will be shown on the official notice board or on a course board displayed on the Committee Boat. Alternatively the marks may be briefed verbally.

10 AREAS THAT ARE OBSTRUCTIONS

The following areas are designated as obstructions:

WARNING – Large Vessels Often Pass Through The Course Area. Competitors are reminded that navigation of these large vessels in the channel is exacting and difficult, and all boats must keep well clear and in good time to allow them unimpeded passage.  Failure to do so will result in a protest hearing initiated by the OOD.

11.3 Boats whose warning signal has not been made shall avoid the starting area during the starting sequence for other races.

11.4 Some races may be started without flag signals. In these circumstances each sound signal will be accompanied by an attempt to broadcast its meaning on VHF channel 37A (M1). This changes RRS 26.

11.5 If any part of a boat’s hull, crew or equipment is on the course side(OCS) of the starting line at the starting signal and she is identified, the race committee will attempt to broadcast her sail number on VHF channel 37A  (M1). Failure to do this will not be grounds for redress.

12.1 The system used by the club for results is  HalSail, the on-line sailing regatta scoring app. The app administrator is Mark Rosenthal. The system stores the IRC and NHC handicaps for the offshore fleet. The NHC handicaps are modified during the season by the results system.

The penalties in the system for Handicap races are as follows: 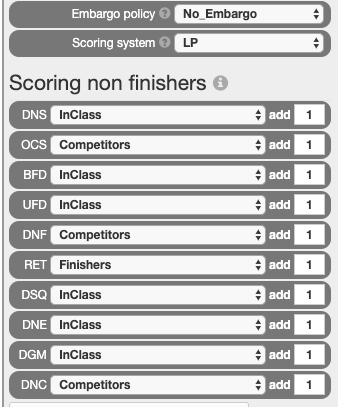 The results are published on the club website as soon as possible after the race.

12.2  Appendix P: For races for which an on-the-water judge is available, Appendix P may apply. This will be notified verbally at a competitor briefing.

11.3 Interference by boat not racing

19 Radio Communication and RRS 55 Trash Disposal may be less than disqualification if the protest committee so decides.

When a Club Rules Advisor is available, the Exoneration Penalty, the Advisory Hearing and RYA Arbitration procedures of the RYA Rules Disputes Procedures may be available. Decisions from RYA Arbitration can be referred to a protest committee but cannot be reopened or appealed. See Addendum B for details. The application of this instruction will be notified verbally at a competitor briefing.

Time limits are as follows:

15 PROTESTS AND REQUESTS FOR REDRESS

15.1  A competitor intending to protest shall notify the OOD as soon as reasonably possible after finishing the last race for the day. Protests forms are available at the race office on the Quarterdeck. Protests and Requests for Redress or Reopening shall be delivered there within the appropriate time limit.

15.2 For each class the protest time limit is 90 minutes after the last boat has finished the last race of the day or the race committee signals no more racing today or the end of a time limit, whichever is later.

15.3 Notices may be posted no later than 30 minutes after the protest time limit to inform competitors of hearings in which they are parties or named as witnesses. Alternatively this information may be delivered verbally to parties and witnesses.

15.4 Notices of protests by the race committee or protest committee may be posted to inform boats under RRS 61.1(b). Alternatively this information may be delivered verbally to the competitors involved.

15.5 A list of boats that, under instruction have been penalized for breaking RRS 42 may be posted or notified verbally to the competitors affected.

Offshore yachts will be scored using  the RYA National Handicap for Cruisers (NHC) system and yachts with a current IRC Certificate will be eligible for scoring in a dual series under IRC Handicap. A yacht’s NHC handicap will be adjusted after every race. A handicap adjustment will not be grounds for a Request for Redress. This changes RRS 60.1.

Dinghies will be scored using the RYA Portsmouth Yardstick system and or class rules.

Before each race, dinghy helms shall sign out by entering their details  required on a declaration sheet provided for the purpose. On returning they shall sign in indicating whether they have observed the rules, exonerated themselves for a rule breach by taking a one or two turn penalty under RRS 44.2, or retired. This is a mandatory safety requirement.

17.2 A boat that retires from a race shall notify the OOD as soon as possible.

When racing, competitors shall wear personal flotation devices adequate for the conditions, except briefly while changing or adjusting clothing or personal equipment. This changes RRS 40.

From 1 November each year until the water temperature rises above 10 deg C, wet suits or dry suits shall also be worn by all dinghy competitors.

It is recommended that yachts taking part in offshore races carry the appropriate safety equipment as shown in ADDENDUM C.

A boat may be inspected at any time for compliance with class rules and sailing instructions.

Except in an emergency or as provided for elsewhere in these instructions, a boat shall neither make radio transmissions while racing nor receive radio communications not available to all boats. This restriction also applies to mobile phones.

Rule 4 of the Racing Rules of Sailing states: “The responsibility for a boat’s decision to participate in a race or to continue racing is hers alone.” Sailing is by its nature an unpredictable sport and therefore involves an element of risk. By taking part in the event, each competitor agrees and acknowledges that:

Each participating boat shall be insured with valid third party liability insurance with a minimum cover of £3 million per incident or the equivalent. HSC requires that owners confirm in writing that their boat is so covered and naming the insurance company.

22.1.1 A boat that may have broken a rule of Part 2 of the Racing Rules of Sailing or rule 31 or 42 may, after finishing the race concerned and before the start of any related protest hearing, notify the race committee that she accepts an Exoneration penalty – a 20% scoring penalty in accordance with rule

44.3(c), except that the minimum penalty is two places if that does not result in a score worse than DNF. However, if a boat caused injury or serious damage or gained a significant advantage by her breach her penalty shall be to retire.

22.1.2 When an Exoneration Penalty is accepted:

(a) Neither the boat nor a protest committee may then revoke or remove the penalty.

(b) The boat shall not be penalized further in a protest hearing when the protest committee decides that it was appropriate to the facts found and the applicable rules.

When there is an incident that will not result in the lodging of a protest or a request for redress, a boat, protest committee or race committee may request an advisory hearing with the race office, and notify any boat involved in the incident. An adviser will then call a hearing to learn what may have happened and will state whether any rule appears to have been broken, and by which boat. A boat may as a result notify the race office that she accepts an Exoneration Penalty when it applies to the incident, or choose to retire.

22.3.1 When a protest or request for redress is lodged, a boat may at the same time request RYA Arbitration, or the protest committee or race committee may offer it.

22.3.2 If the parties and a member of the protest or race committee agree that RYA Arbitration is suitable, an arbitrator (who may be that member of the protest committee) will call a hearing conforming to Section B of Part 5 of the Racing Rules of Sailing, except that the first sentence of rule 64.1 will not apply. Instead, when the arbitrator decides that a boat that is a party to the arbitration hearing has broken a rule for which the Exoneration Penalty is available, the party will be invited to accept that penalty, and, if it is accepted by a protested boat, the protesting boat will be allowed to withdraw the protest, changing rule 63.1.

22.3.3 When there is not an agreement to use RYA Arbitration, or when, after RYA Arbitration, a protest is not withdrawn or the Exoneration Penalty is not applicable to the facts, there will be a normal protest hearing, at which the arbitrator may be a member of the protest committee. Rules 66 and 70 (reopening and appeal, respectively) do not apply to the arbitration decision since this is not a protest committee decision or procedure. A boat may still accept an Exoneration Penalty at any time before the start of a protest hearing and receive its protection from further penalization. She may also retire.

These recommendations are split between yachts of less/more than 13.7m There are no statutory requirements for safety equipment other than those required under SOLAS V. Your vessel should be compliant with its appropriate size and intended use.

Holyhead Port Authority LNtMs This lists the latest Local Notices to Mariners and should be checked prior to entering an event.

Please see below the SI's and follow this link for your downloadable entry form.

This map shows the race marks in Holyhead Bay. Please note "Spit" sometimes known as "Breakwater" is NOT a mark of the course but yachts should not pass to the wall side of this mark