In trying to organise a regatta type event for one day over the weekend it became apparent that it was unlikely that we would have many entries. On the day Jaydreamer joined Flair IV for an interesting race in the morning and then Pastime joined Flair for the afternoon race. Both races were round the cans in Holyhead Bay, not as we had hoped for the afternoon race to be ‘Round the Skerries and back’, as due to the ferry departures not being as scheduled the afternoon race start was delayed until after the second outbound ferry had left the Port entrance.

The morning race between Jaydreamer and Flair Iv was also delayed at the start with the ferry movements making starting from inside the New Harbour a difficult challenge. The winds at the start were very fickle north easterly. Jaydreamer had the better start and led out of the New Harbour clearing the TSZ before the arrival of the second ferry. Flair IV decided to alter course early to demonstrate her intentions and headed on starboard tack to the end of the breakwater then tacked to pass around the stern of the incoming ferry. Jaydreamer had continued on port tack and ended up in some very light winds somewhat to the south and east of Clierpa while Flair held her course on port almost to the coastline to get a good angle to Bolivar.

At Bolivar Flair had a considerable lead over Jaydreamer and tacked round the mark to lay a course for the next mark, Langdon Ridge. The crew on Flair did not believe that the variation between the heading and the course over the ground, as proposed by the plotter, could be right, 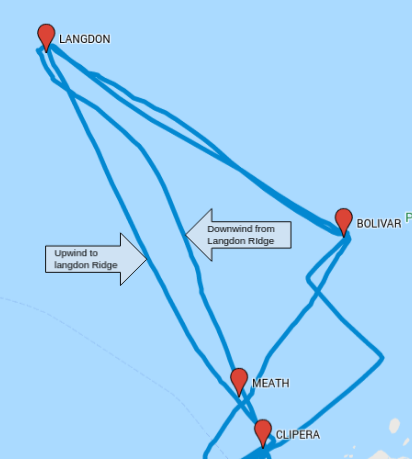 it was and as she approached Langdon Ridge her path had been absolutely perfect with the strong currents still working to Flair IV’s advantage in the Langdon Ridge area. 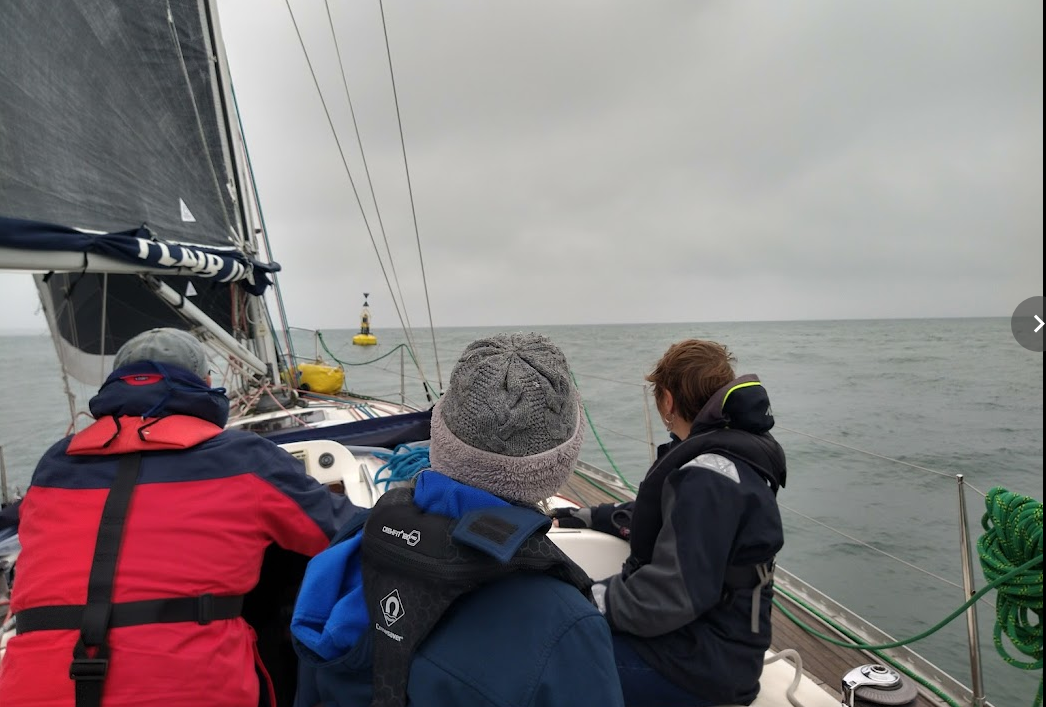 Rounding the mark the short crew numbers struggled to hoist the spinnaker and she lost a lot of the ground she had gained over Jaydreamer in the early part of the race. The leg from Langdon Ridge to Clipera was pretty much dead downwind so once Flair's spinnaker was flying she made good progress towards Clipera whereas Jaydreamer had to tack her asymmetric spinnaker downwind and at Clipera had dropped some of the recently acquired catchup.

The leg back in from Clipera to the finish however suited Jaydreamer and at the end of the race Jaydreamer was just under 2 minutes behind.

Jaydreamer and her crew then sailed back out to go off to have lunch while Flair shadowed Pastime and discussed the plan for the afternoon race.

So the decision was to attempt to sail a course as planned round the Skerries but to check on approaching Langdon Ridge to see if the timing would still make this passage viable. The start had to be delayed to 14:35 just after the second ferry, running ahead of schedule, left the port. Flair IV got the better start and pulled ahead as they sailed out of the New Harbour. The course had been set as Clipera, Langdon Ridge and then round the cardinal marks to the north and east of the Skerries. 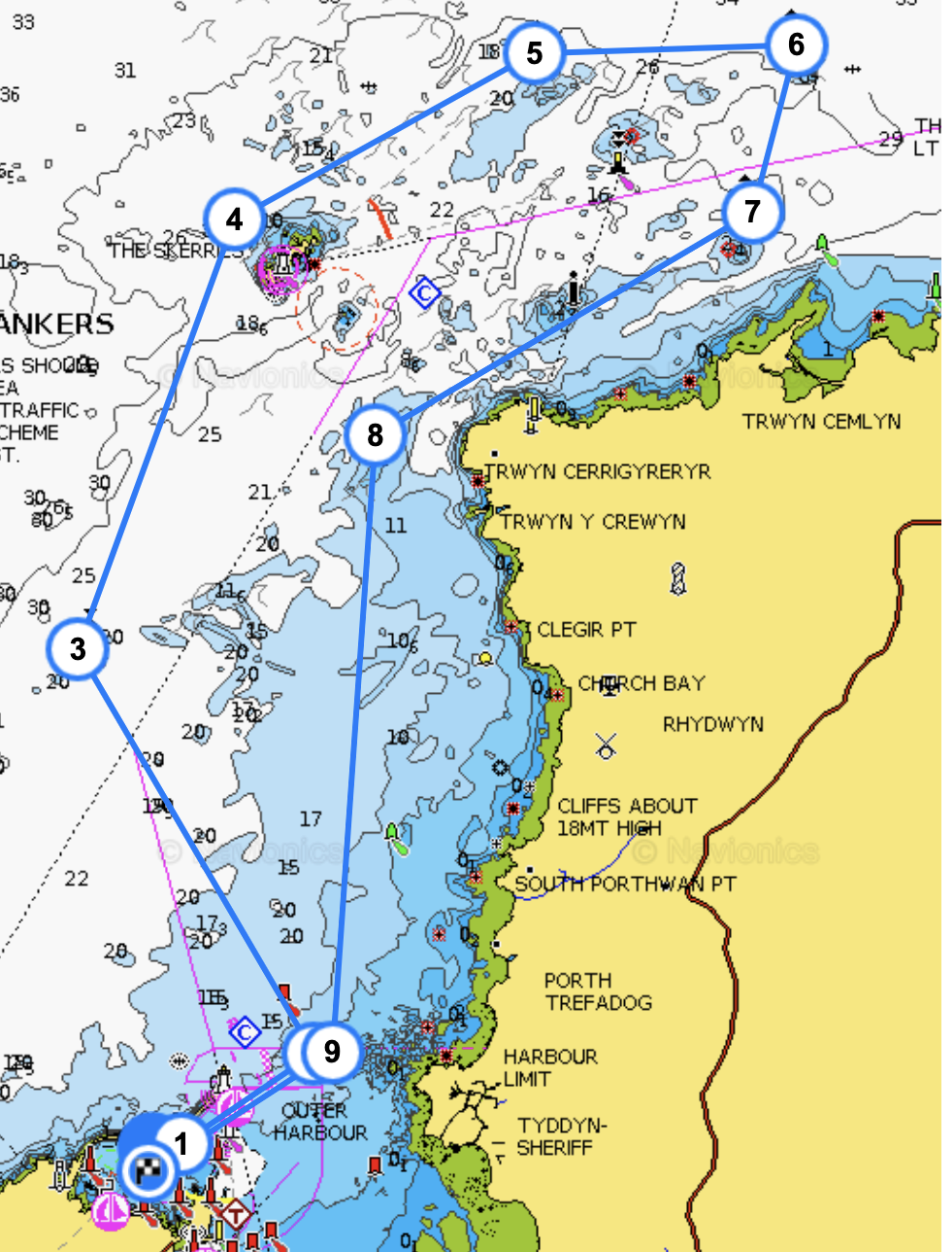 Flair was first to Clipera and held her course for a few hundred metres before taking onto starboard. Pastime had tacked immediately round the mark and both were beating to windward on a course to Langdon Ridge with Flair well to windward of Pastime and once again the chart plotter said her course was perfect.

At Langdon Ridge this time there was almost no tide running as the high water at Carmel Head was, when planning the race, shown to be at around 15:15. Consequently before the mark the decision was made to alter the course to go from Langdon Ridge to Bolivar then Penrhos, Clipera and finish as it was felt that the delay to the start meant that the tides around the Skerries would be too strong against the two yachts.

On the way back from Langdon Ridge to Bolivar flair stayed ahead of Pastime as she prepared for the spinnaker set after Bolivar to sail leaving Clipera, however on this leg Flair should have gybed but with an issue of two this didn’t happen very quickly and so she was closer to Meath rather than Clipera. Her woes continued on the other tack down to Penrhos and as they dropped the spinnaker she had to sail onward into the shallow area until it was clear to gybe again and come back up to windward to complete the Penrhos rounding. Flair’s track round Penrhos. 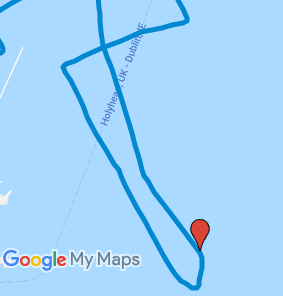 On the beat back to Clipera the two boats passed each other closely on different tacks but Flair retained her lead at the mark. Her crew of 4 were by now exhausted with the spinnaker issues and did not fly their kite on the final leg which allowed Pastime to slowly catch and pass flair just as they crossed the finish line with Pastime beating Flair over the water by just 2 seconds! 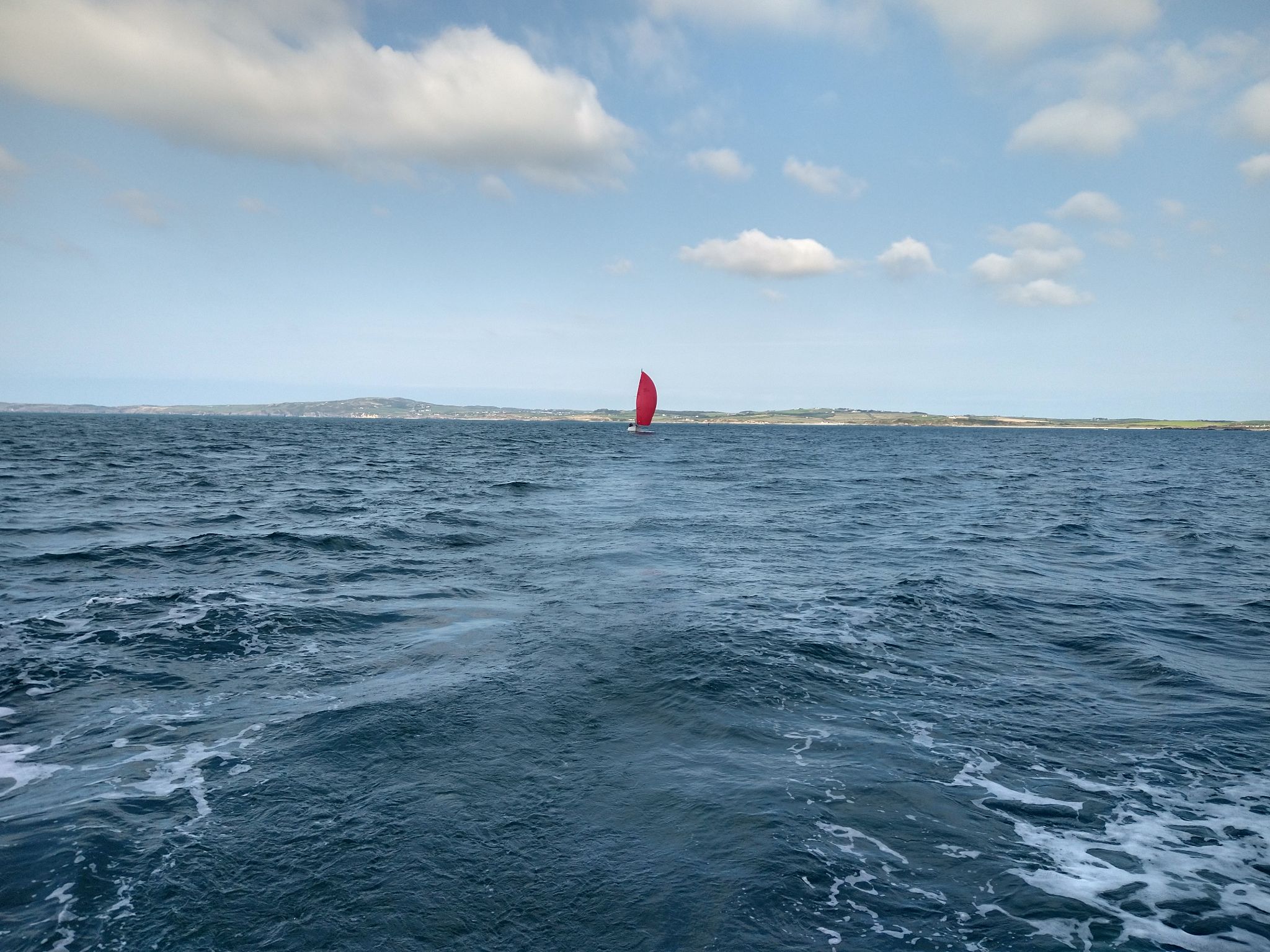 A low turnout but those who participated had a great time with our Commodore, Sue James, crewing on Pastime. Good to see you all.