A much diminished fleet for the race with just Ninja, Jaydreamer, Carpe Diem and Flair IV preparing for the challenge of the Cruise ship anchored across the New Harbour entrance.

It was very disappointing that the tenders from the Cruise liner were cutting through the moorings area with significant wake as Ninja and Flair IV, both on the western extreme of the sailing club moorings area. were loading sails and getting ready for the start. This issue has been raised on a number of occasions with the Port Authorities yet the information doesn;t seem to get through to the pilots of these vessels let alone the other motorised craft making passage to what remains of the marina.

The course for this evening’s race was set by OOD Paul Humphreys as follows:

With the Cruise ship scheduled to leave at 19:00 the OOD confirmed the start arrangements with Port Control with agreement to start as normal at 18:30. 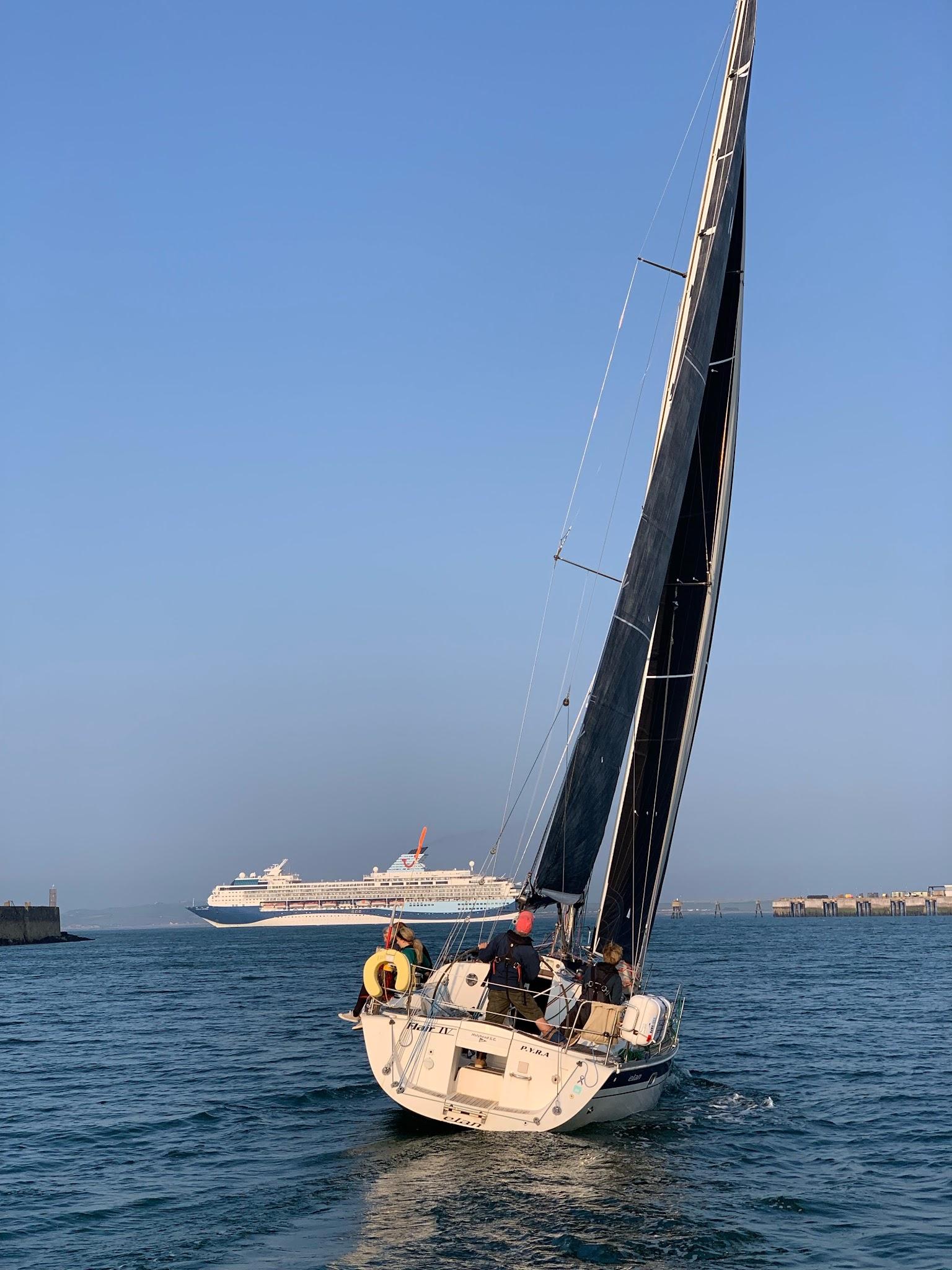 At the start Jaydreamer and Flair ran side by side over the start line with Flair holding her ground very close to the IDM and then managed to gain the advantage of the fickle winds under the breakwater to establish a small lead. Ninja followed these two and Carpe Diem bringing up the rear of the fleet.

Flair sailed sufficiently close to wind to manage to pass the cruise ship to windward whereas the others all had to tack onto starboard towards the breakwater light.

That close up to the cruise ship you realise that these things are massive! 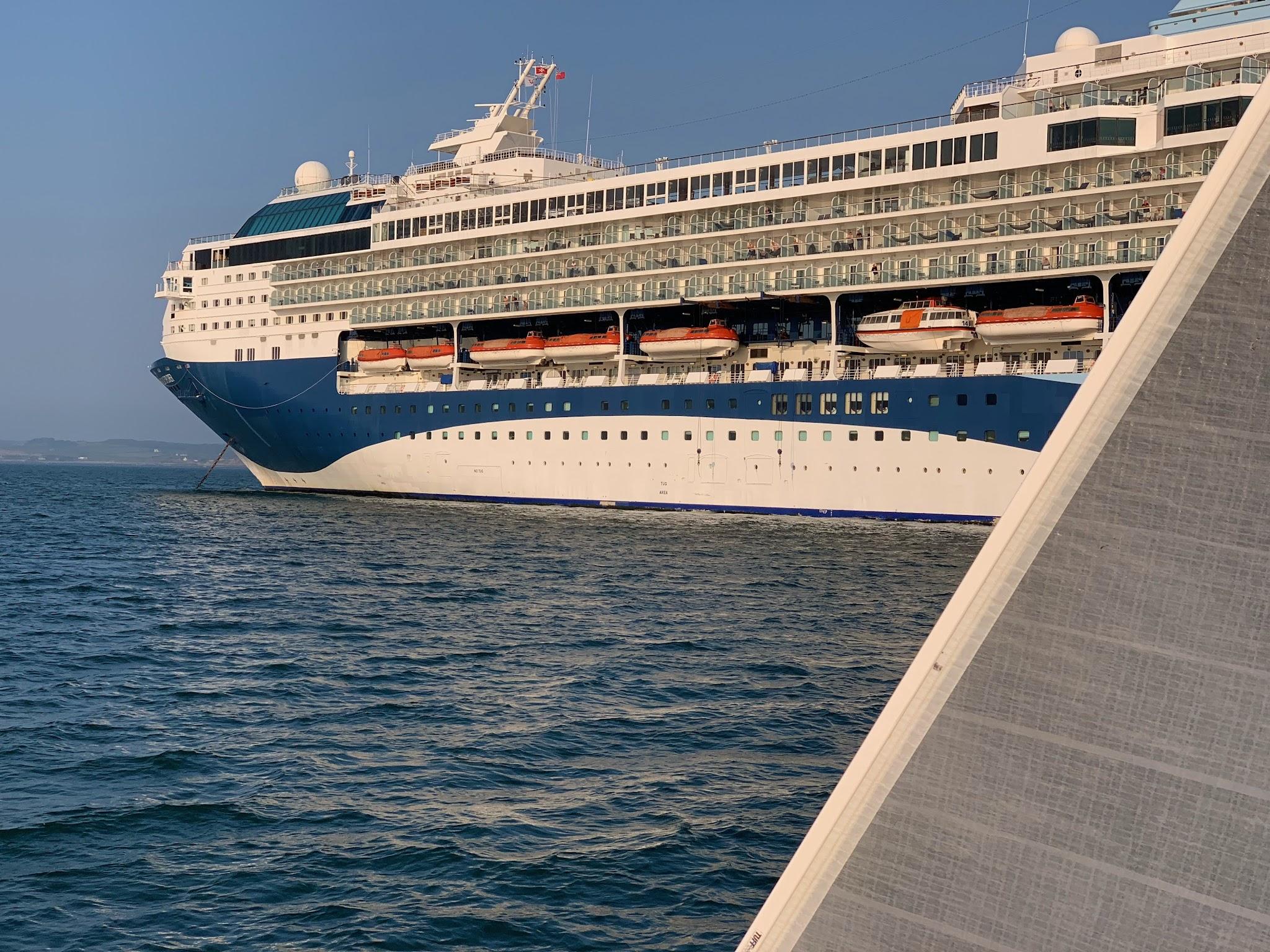 It was a perfect evening for sailing and once again going up to Bolivar for a long windward leg. As the tide had just turned after low water there was little current assistance as they sailed to Bolivar and the usual problems of rounding the can in strong currents was fortunately absent. However there was a fishing vessel which seemed to be attached to the buoy and Flair, as the lead boat at the mark, passed round her stern sufficiently far to miss their fishing lines. Jaydreamer and Ninja however sailed between the small motor vessel and the buoy and momentarily seemed to be ahead of Flair but with the leg back to Penrhos, requiring the competitors to pass to seaward of Clipera it was a dead downwind leg, once again suiting the symmetric spinnaker boats. As Flair got her spinnaker under control her course, with mainsail set on her port side, was direct to Clipera as she remained ahead of Ninja with Jaydreamer having to tack down wind with a close pass to the stern of Flair IV.

By now the cruise ship was casting off from her anchor and setting off out o the Port with the Pilot on board and followed by the Pilot boat to collect the Pilot once she was clear of the TSZ. 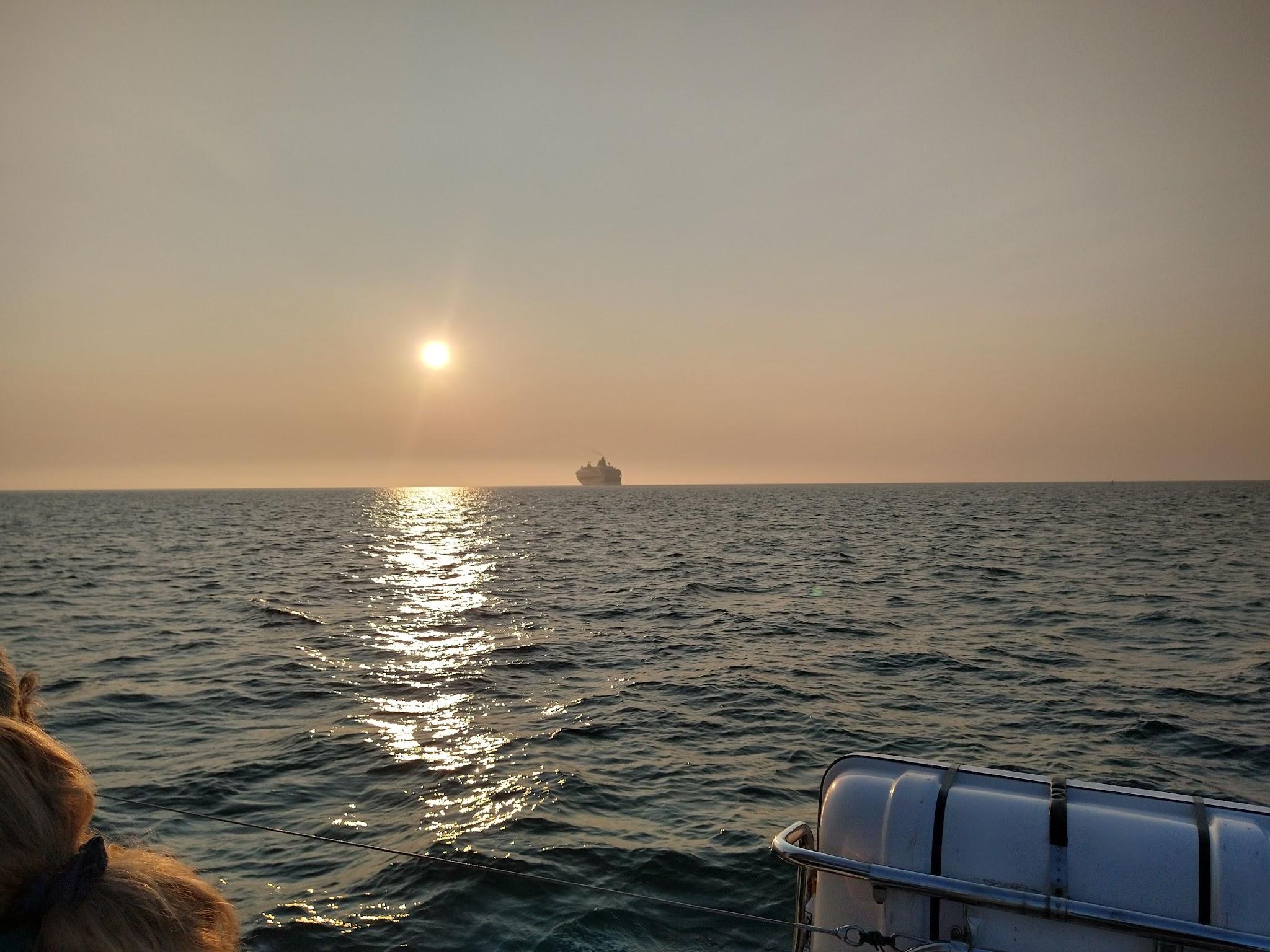 Ninja had gybed her spinnaker and was sailing to the east of the direct course to Penrhos with Jaydreamer continuing to tack downwind. Flair IV meanwhile made a direct track to Penrhos and made a good turn at the mark but the 3 yachts were all within a few seconds as they rounded the mark to port. 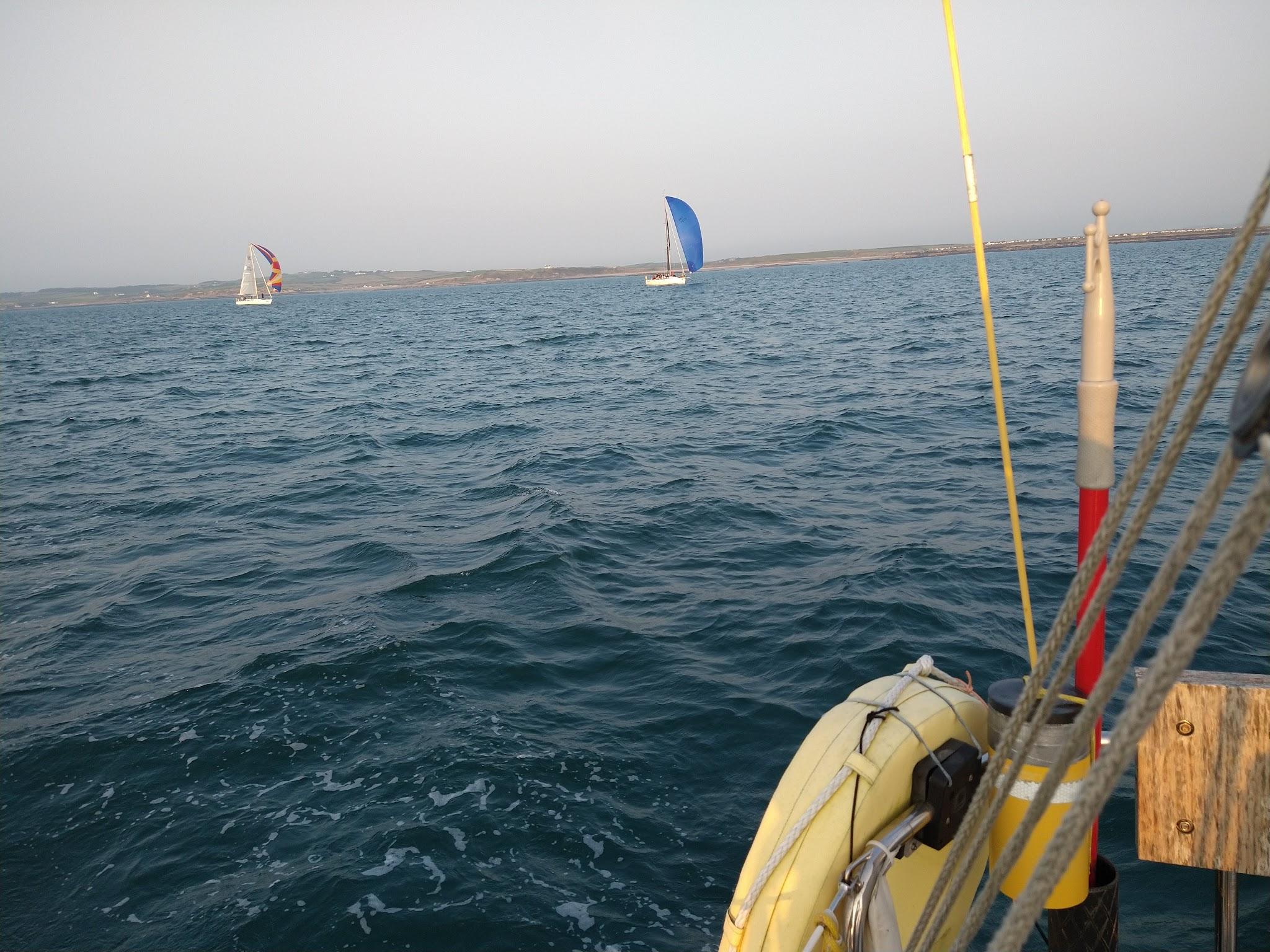 Jaydreamer tacked onto starboard just after the mark but both Flair and Ninja stayed on port for a short distance before Flair tacked on the penultimate leg to Clipera. 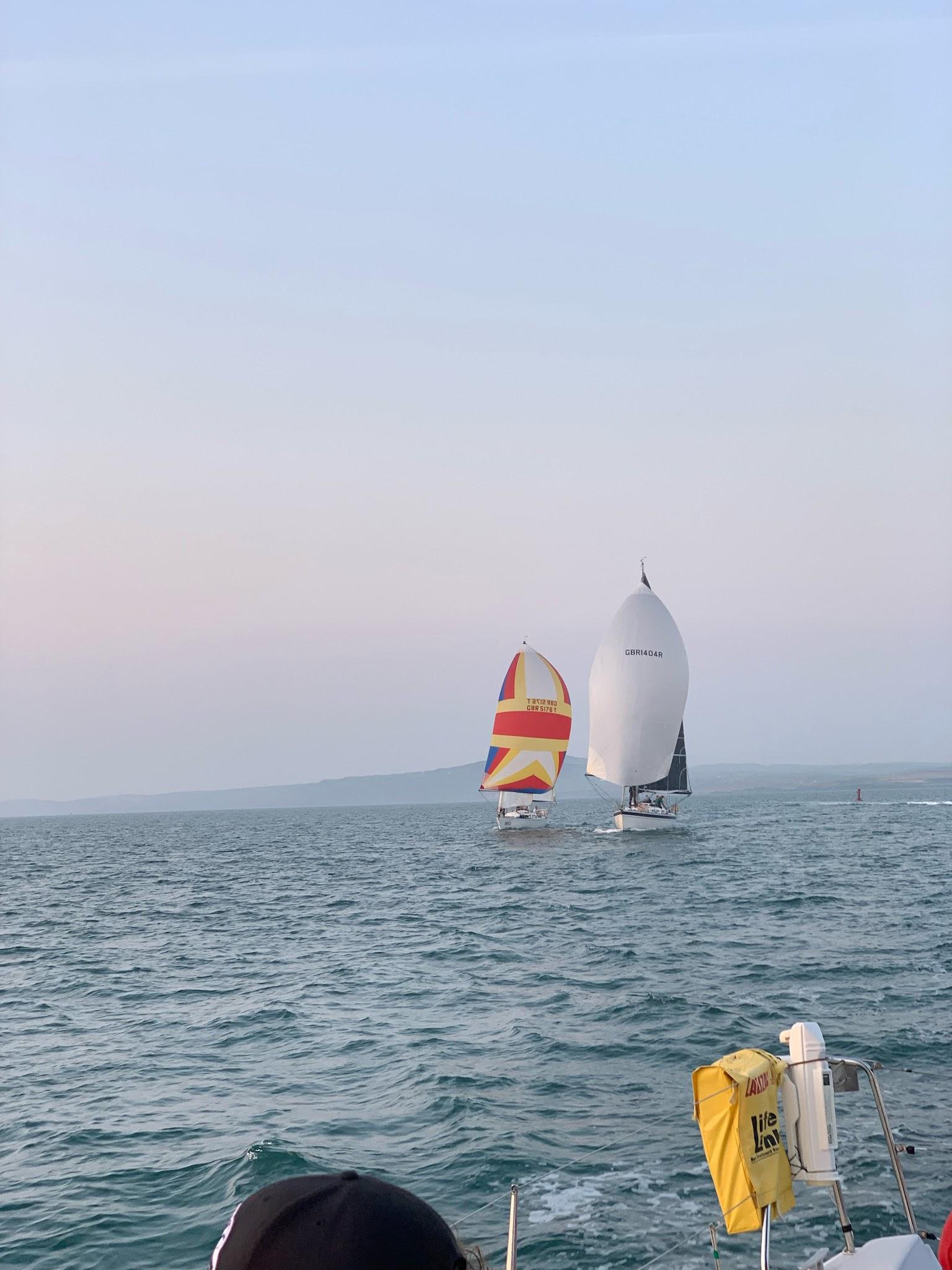 Jaydreamer managed to just beat Flair IV to the mark with Ninja in 3rd. Carpe Diem was on her way down to Penrhos as the others raised their spinnakers again for the final leg.

On this final leg Ninja eventually caught and overtook Flair IV as they entered the New Harbour with the fleet clearing the TSZ before the Epsilon set off from the port. 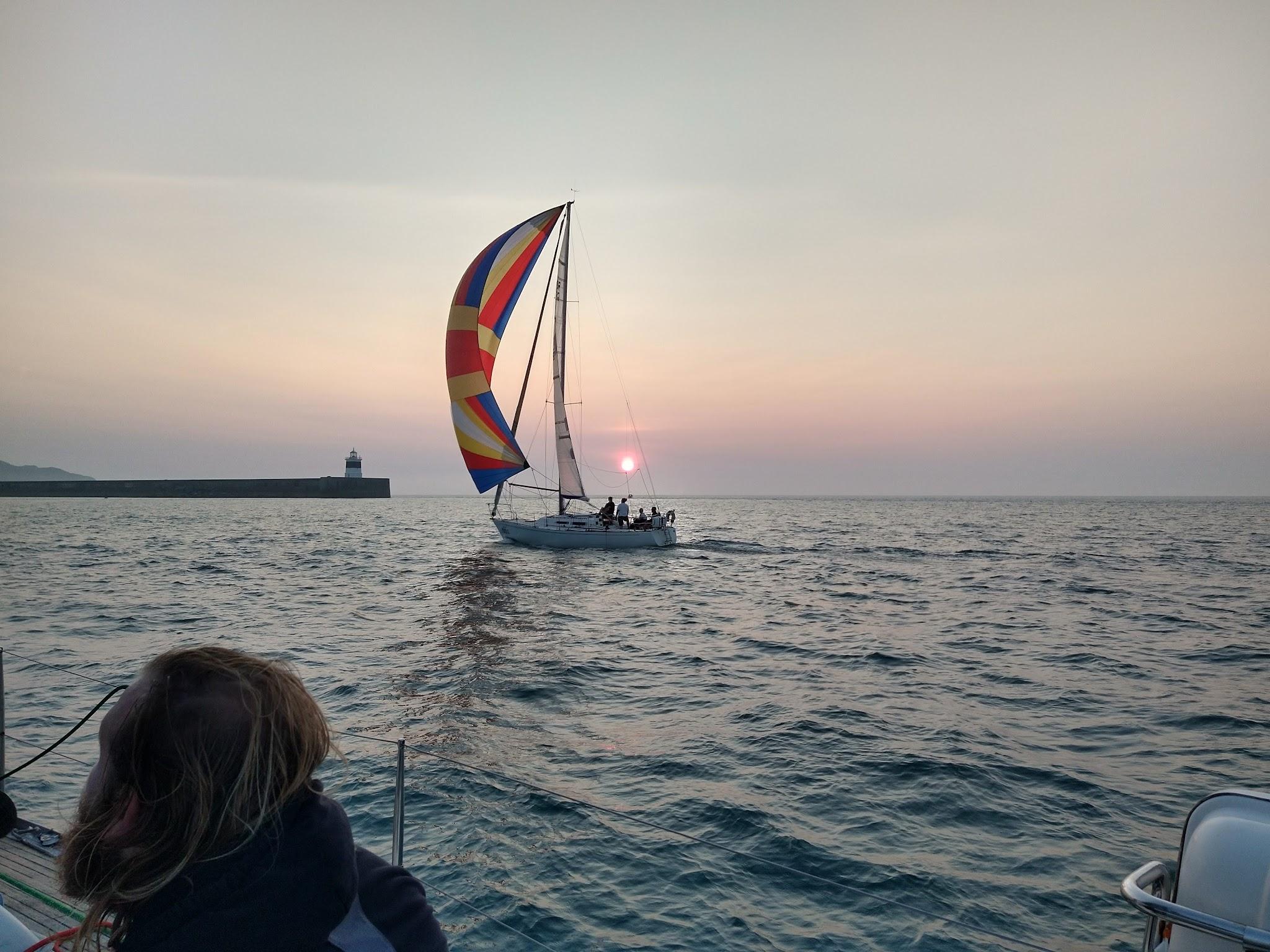 Flair determined to redress this situation continued the close racing and  with Ninja sailing into a hole in the wind just yards from the finish line Flair just managed to inch past her with just 7 seconds between them over the line.

The sun setting over the breakwater was a sight to see, really spectacular, with the sun appearing to roll along the breakwater as we sailed into the New Harbour. Who could want more from a Wednesday evening at Holyhead. 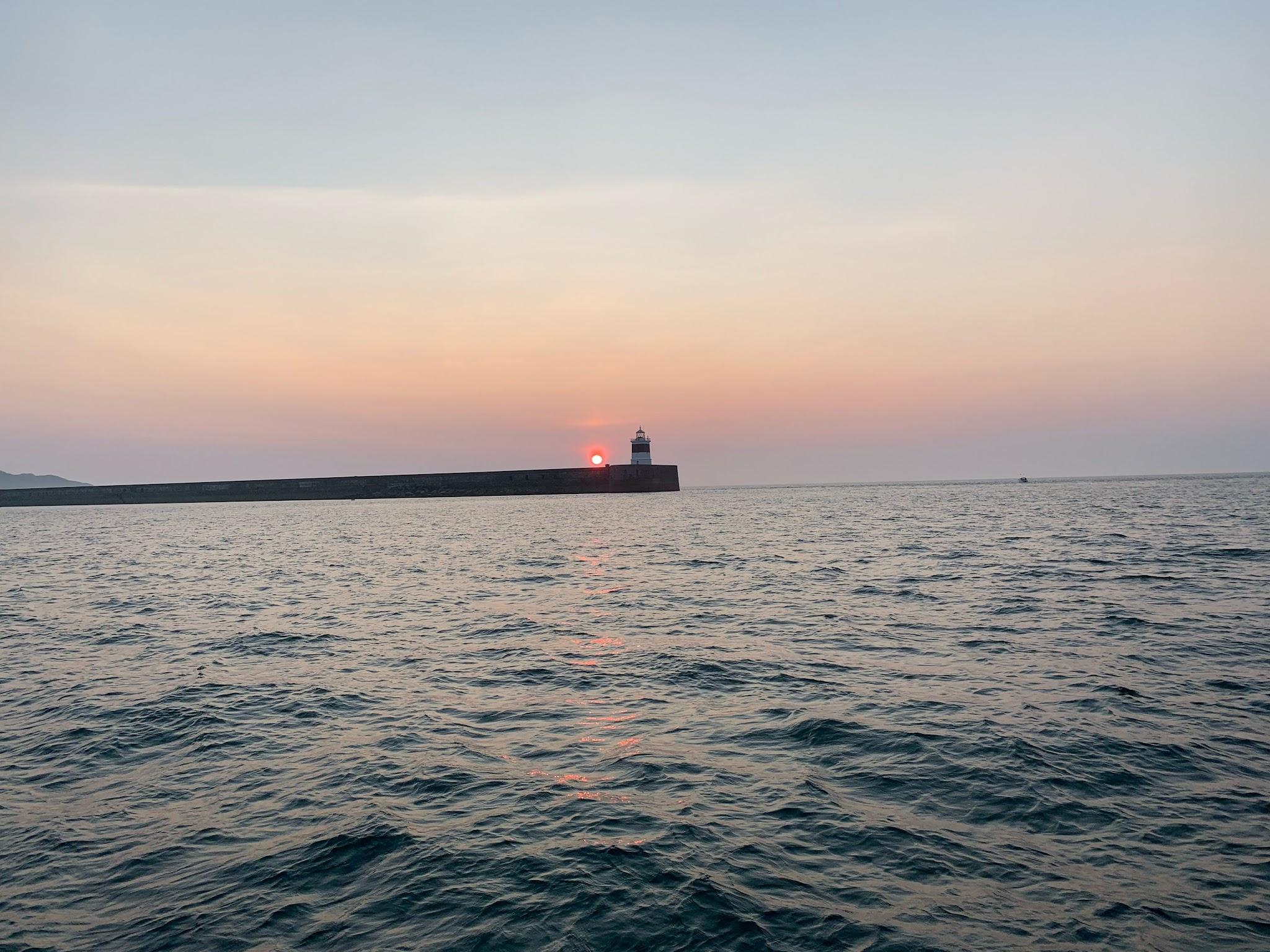 Results before Flair IV was required to Retire as she rounded Clipera to port on her way to Bolivar contrary to rule 15:6 of the sailing instructions.

With 2 of our normal fleet, Houdini and Wild Haggis, still away following their efforts in the IRC Welsh National Championships the fleet was reduced to just 6 yachts for this race. Congratulations to Houdini for coming first in IRC Class 2 and a very good effort, up against some seriously quick yachts, by Wild Haggis. You’ve made the club very proud of your achievements.

Dawn, OOD, set the same course as the previous week except for the last rounding of Clipera which was changed to port. There was some nervousness about the start time as the visiting cruise ship was still anchored as the normal start time approached. Dawn checked on Ch 14 and eventually got clearance to start at the normal time of 18:30 as we all watched the massive ship maneuver out of the New Harbour entrance.

The fleet, by now getting used to downwind starts with the winds returning to the southwesterly direction, were all preparing their spinnakers as the 1 minute warning was heard. This involved some very close sailing as they hassled across the start line with Ninja getting the best start. 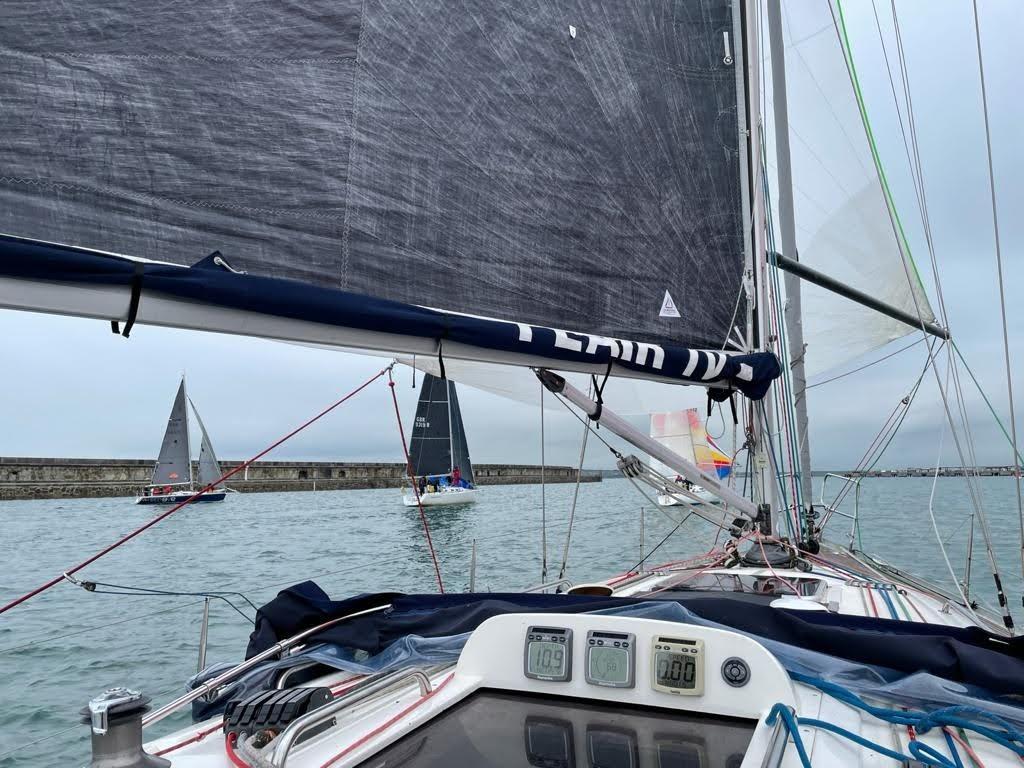 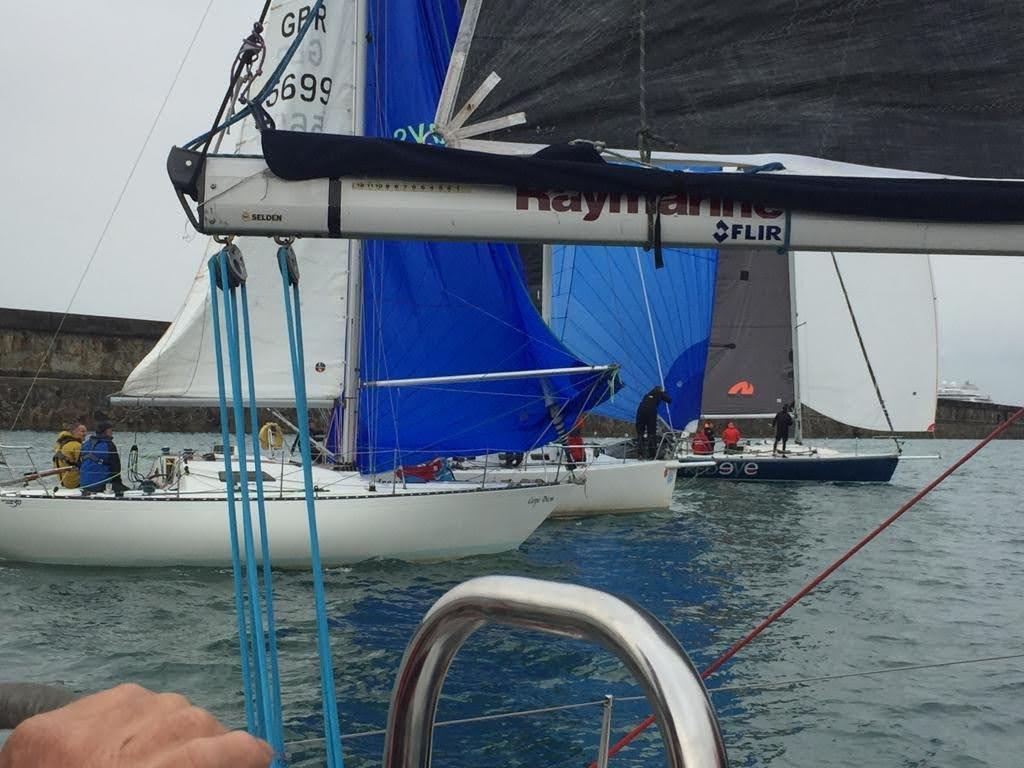 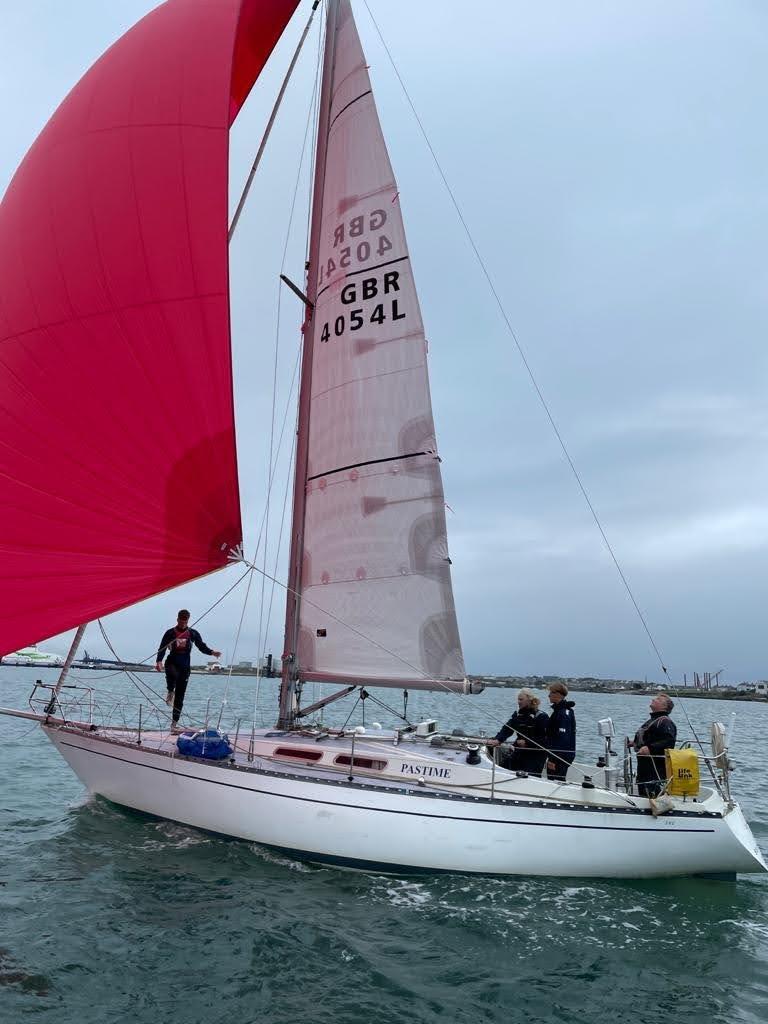 Since Flair was shielded by

Pastime she hung back and passed around Pastime’s stern then quickly overtaking her by turning dead downwind with Pastime having to head up to get drive on her asymmetric.

Carpe Diem the other symmetric spinnaker yacht was also doing well as they headed to the Harbour exit. 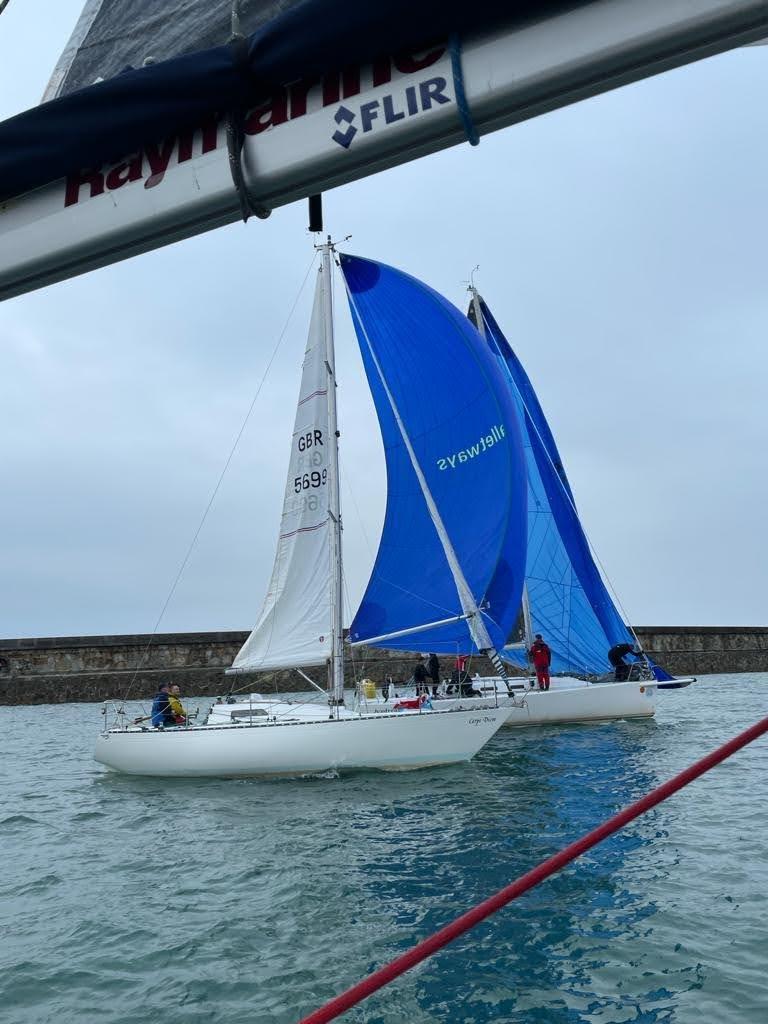 Once out of the New Harbour the wake from the maneuvring cruise ship in the light winds made it difficult to keep the spinnakers pulling but this soon levelled out crossing the TSZ. The advantage of the symmetric spinnaker yachts was evident as they closed in on Clipera with Ninja rounding first with Redeye being closely followed by Flair. Good spinnaker drops kept the order as they headed windward to Penrhos. This was a tight beat and most of the yachts had to tack before rounding the mark with Flair IV and Pastime making it in one. The crews were busy repacking their spinnakers and preparing for the leg back to Clipera as the winds gradually increased.

From Penrhos it was a broad reach which suited the asymetrics allowing them to close the gaps but there was no change in the order as they reached Clipera with another spinnaker drop and beat back towards the IDM. Redeye and Flair held their port tack till they were square to the end of the breakwater then made one tack across to the Orthios jetty whilst Ninja, clear ahead, and Jaydreamer tacked shortly after Clipera but was still behind Flair as she tacked back onto port to make the IDM. 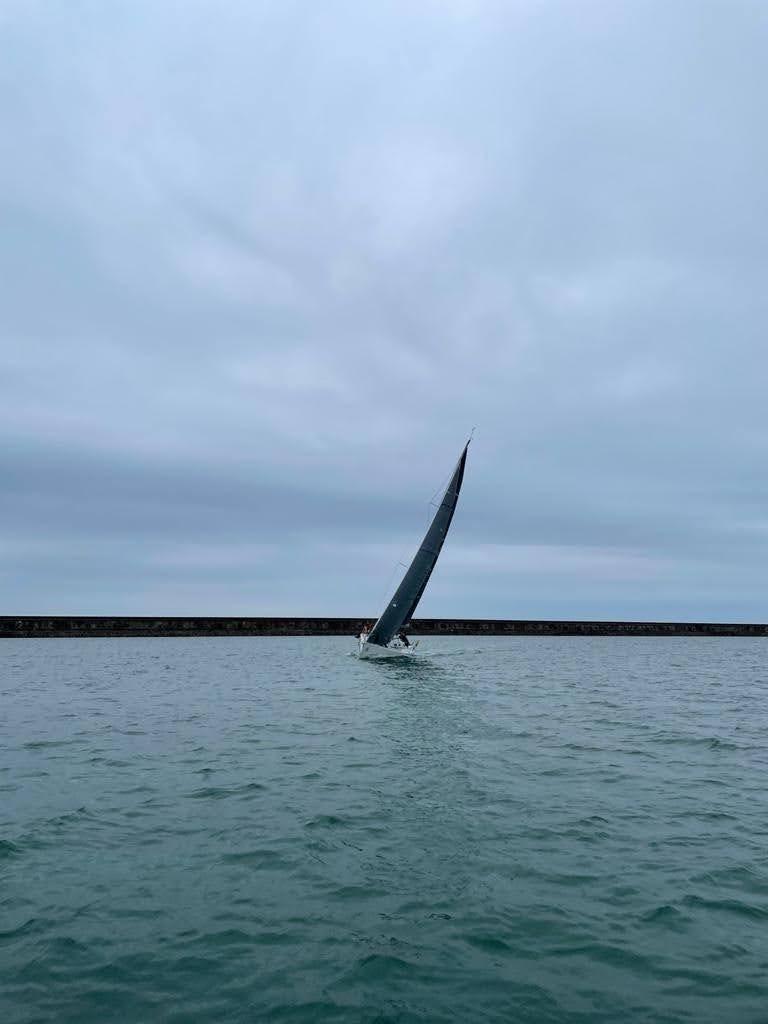 The Squib racers were now also closing towards the finish line causing Flair to have to sail around the stern, at very close quarters, of two squibs on starboard tack. 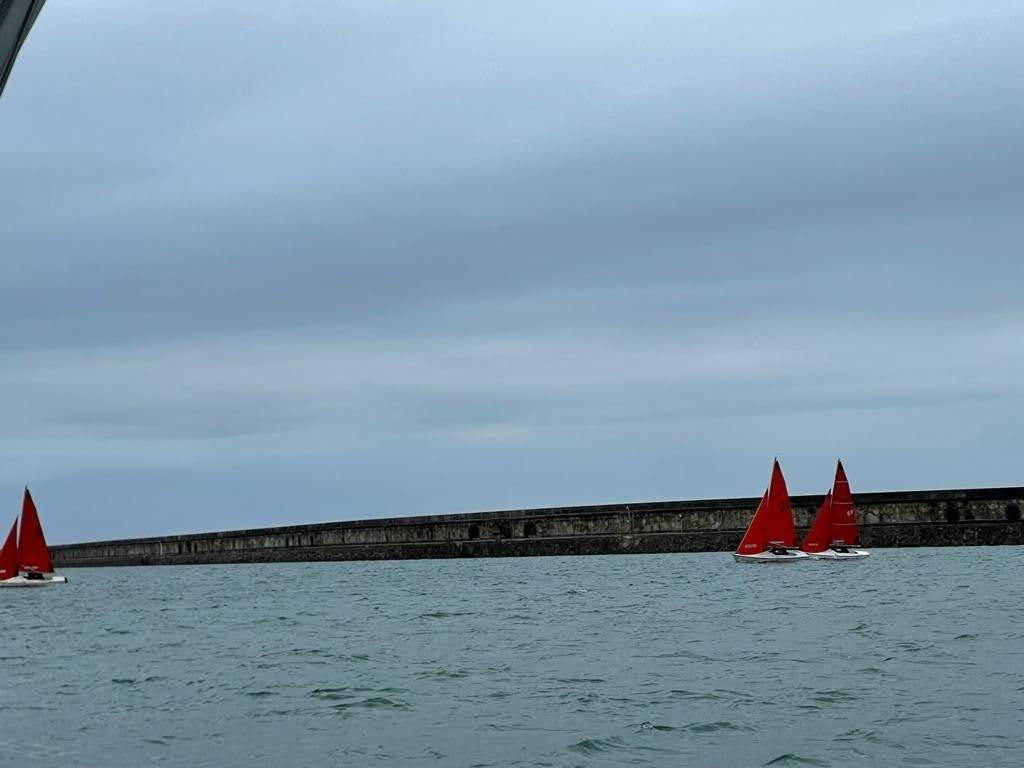 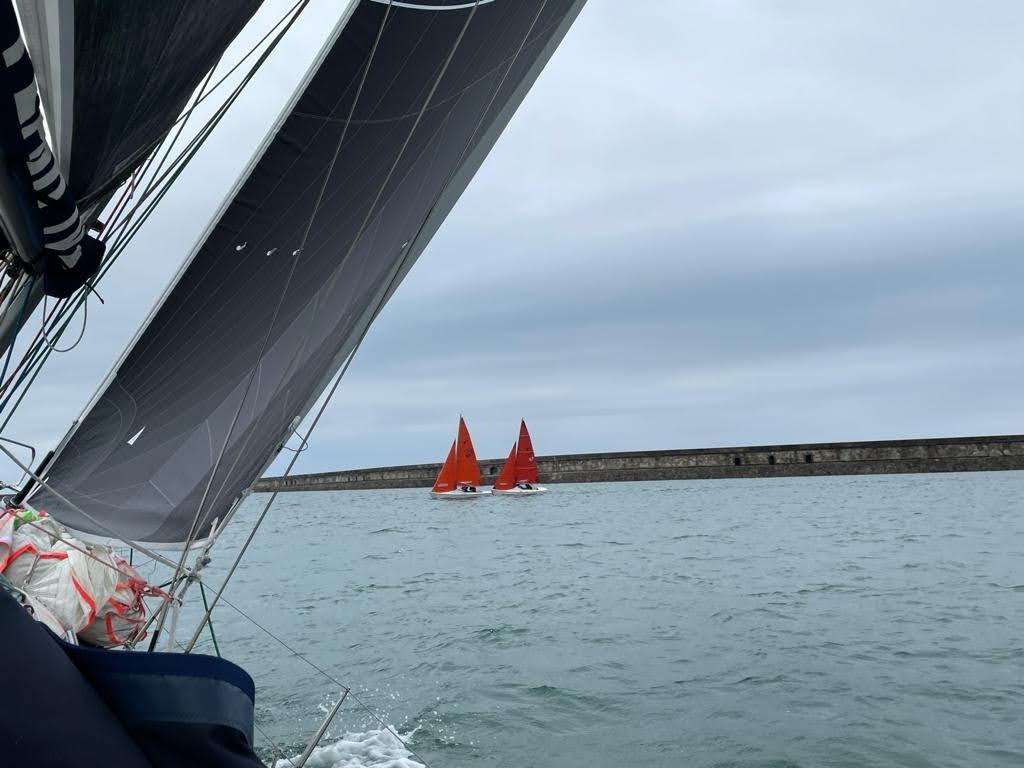 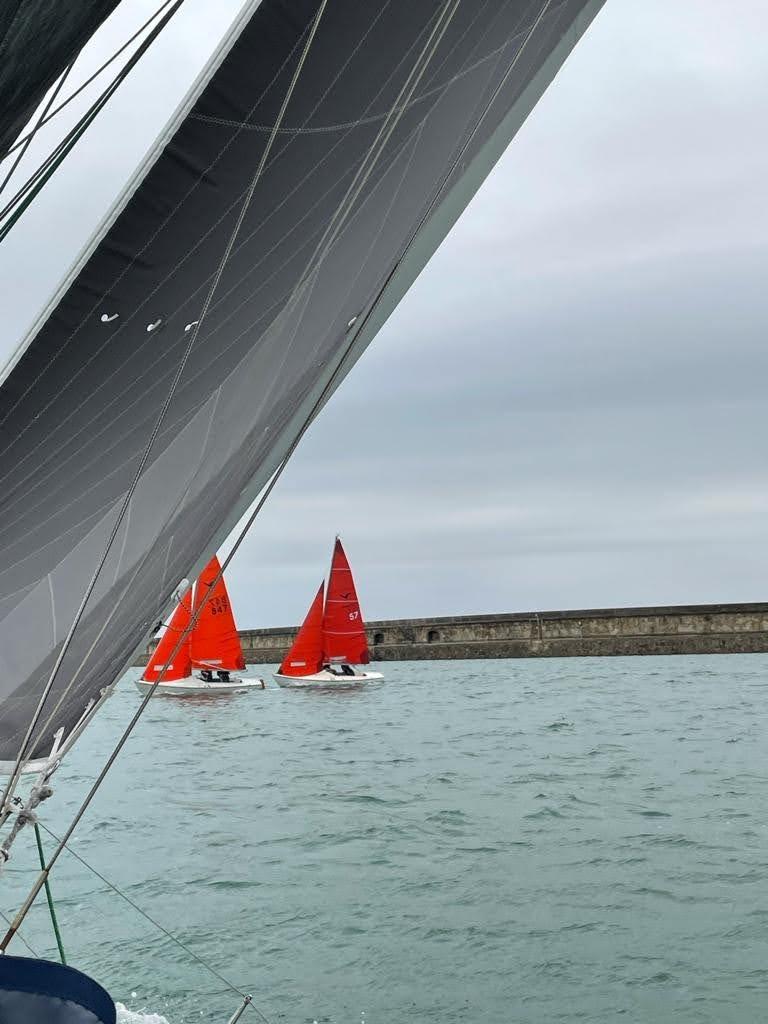 Once again the crews prepared their spinnakers as they approached IDM gybing round the mark. Once around the mark the asymmetric spinnaker yachts had to tack downwind to attempt to gain benefit on the dead downwind leg. But the order remained the same as they rounded Clipera for the last time. Albeit they were pretty close!

Well managed spinnaker drops, as they approached the mark, kept the order the same Ninja, Redeye, Flair IV, Jaydreamer, Pastime and Carpe Diem. The tacking back into the New Harbour was again close as they crossed on their different tacking strategies, Flair IV managed to leave her tack until she was alongside the western side of the Orthios jetty but still had to tack twice more as they neared the knuckle keeping Jaydreamer astern.

Even with the misty and damp conditions this was another great evening of close quarter sailing at Holyhead Sailing Club. Our thanks once again go to Dawn for Officer of the Day and to Becca Warren for the photos.

With the weather being so variable with strong winds and heavy rain up to around 17:00 on the day no one quite expected the evening to go as well as it did. By the 5 minute warning was sounded there was next to no wind and the yachts were struggling to get to the start line all preparing for the downwind leg. 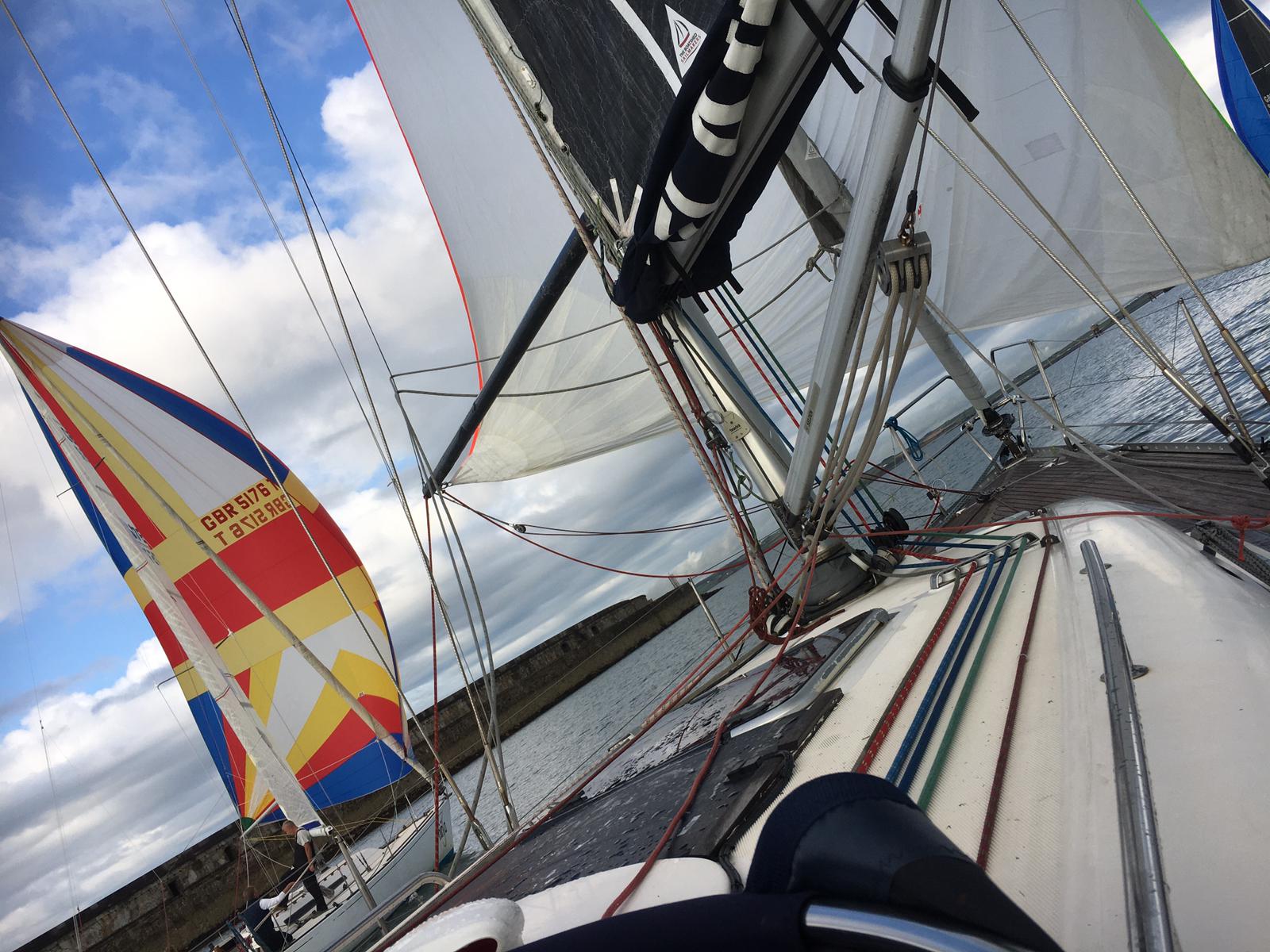 Jaydreamer got off to the best start with some very close quarter sailing as the other yachts headed to round IDM. 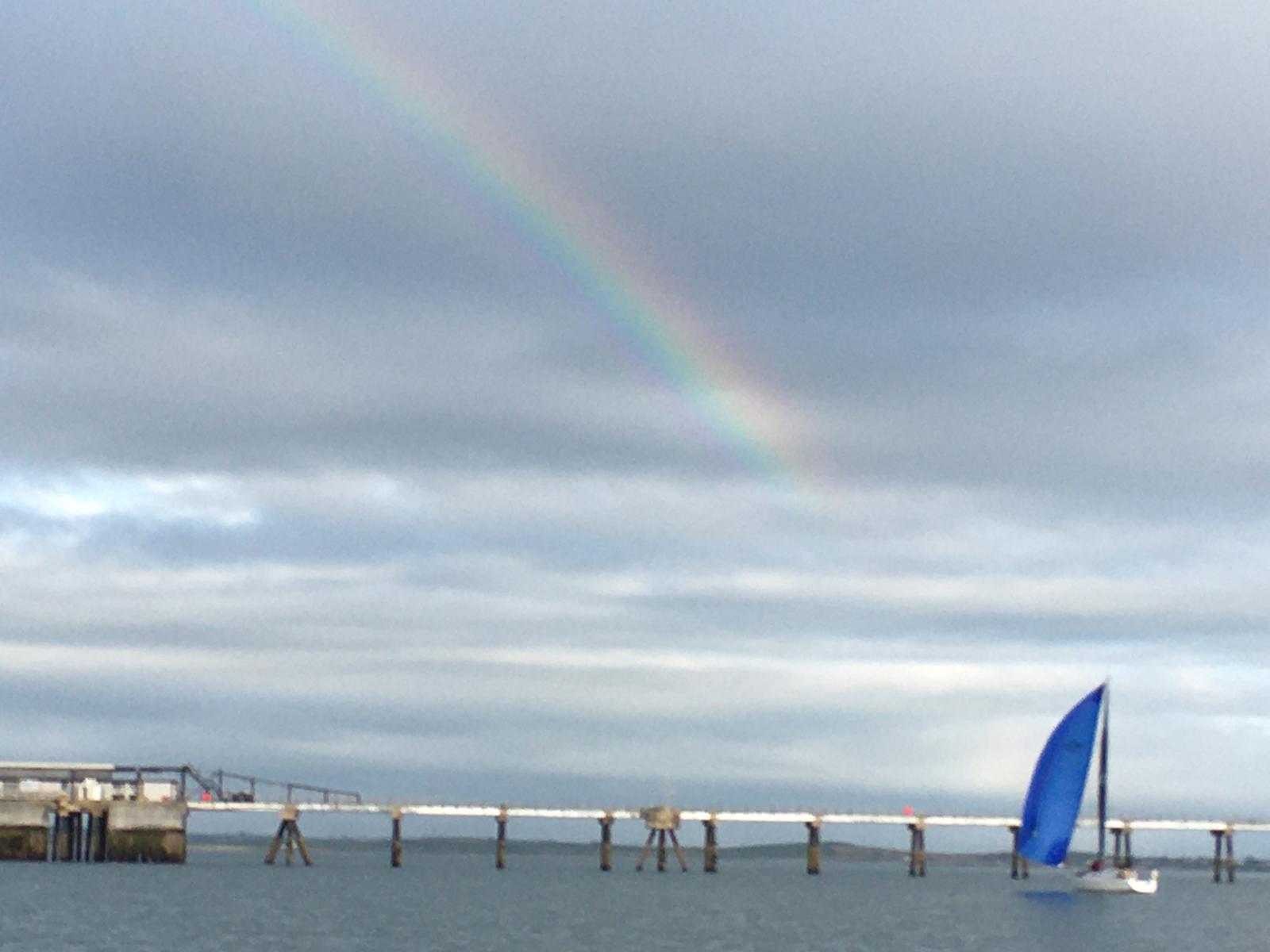 Jaydreamer at the end of the rainbow!

The winds were very light all the way to Clipera making the dead downwind leg very slow with Jaydreamer and Pastime tacking downwind behind the others. At Clipera Ninja had a clear lead of a few minutes followed by Flair IV then the other three in close proximity.

Paul (OOD) and Dawn (assistant OOD) had set the course as follows:

Once round Clipera it was a beat to Penrhos in slightly increasing winds with the yachts having to tack twice to reach the mark. The order at Penrhos was Ninja, Flair IV, Jaydreamer, Pastime and Carpe Diem as they set their spinnakers again for a downwind leg back to Clipera. Once again, like on the first leg, there was an advantage for the symmetric spinnaker yachts and although at times Jaydreamer seemed close to Flair IV the order was the same as they headed back into the New Harbour as the Irish Ferries ship announced her departure. Ninja and Flair IV were luck to be sufficiently clear of the outbound TSZ lane but Jaydreamer had to alter course  to show the outbound ferry her intentions.

The evening sunshine was making it difficult to see the jib telltales as the yachts sailed into the New Harbour but a pleasant warm feeling as they tacked to get past the knuckle and over the finish line. 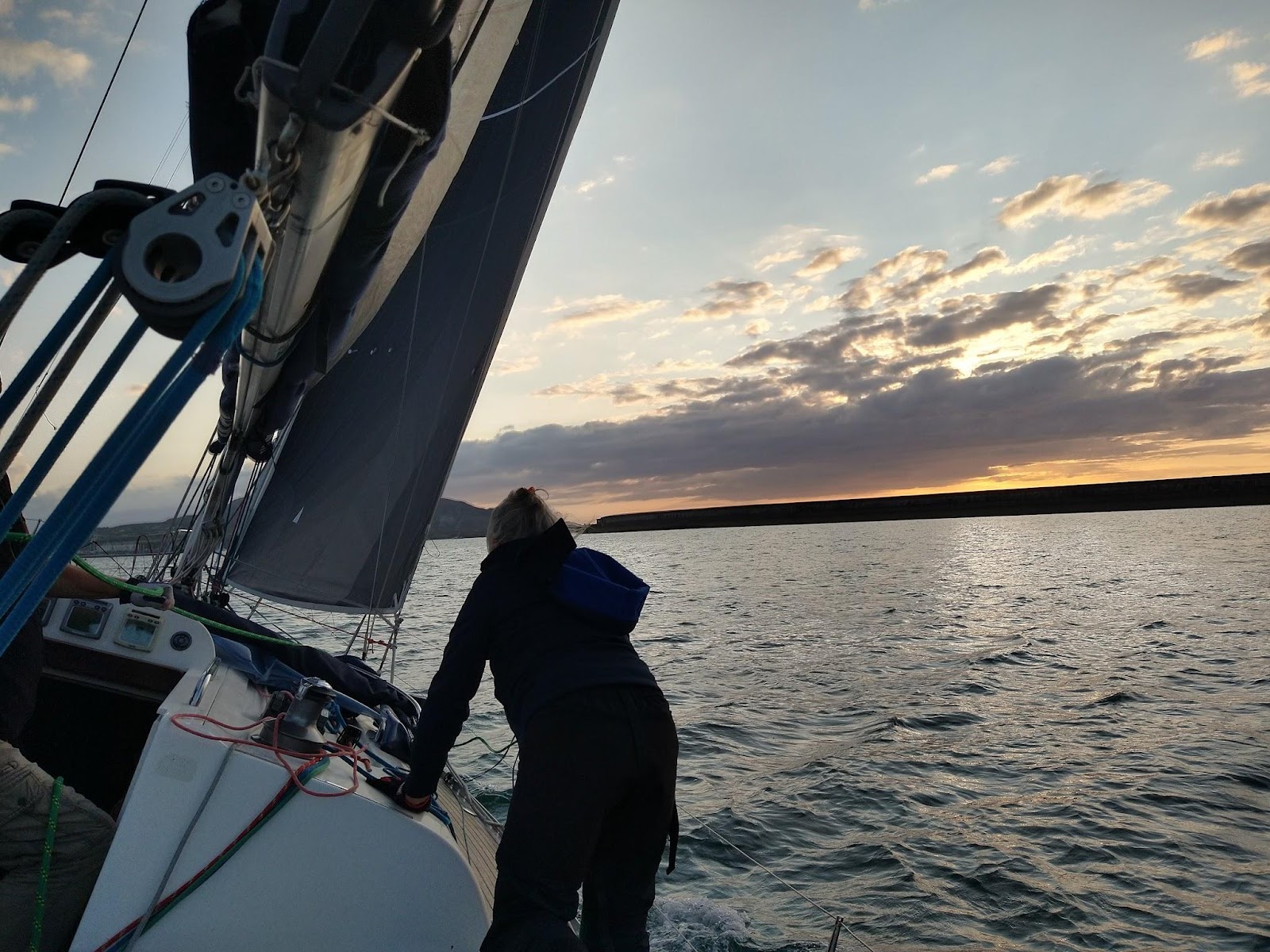 No race report as I was unable to attend. Photos from Houdini are shown in the Google Photo Album for August Wednesday Races